Consolidate your NAT Gateways with Transit Gateway and save some money

At ReInvent of 2018 AWS announced Transit Gateway. Transit Gateway is a managed service that allows you to connect multiple VPC’s from different accounts and on-prem connections through a single endpoint.

People who manage more then just a few accounts and need on-prem access during their transition to the cloud often use VPN tunnels, Direct Connect or other solutions provided by 3rd party providers like Cisco. Add VPC peering to that mix and you end up with quite a complex setup you need to manage. Transit Gateway can simplify this.

These images from the reInvent slides illustrate this in the case of VPN tunnels. 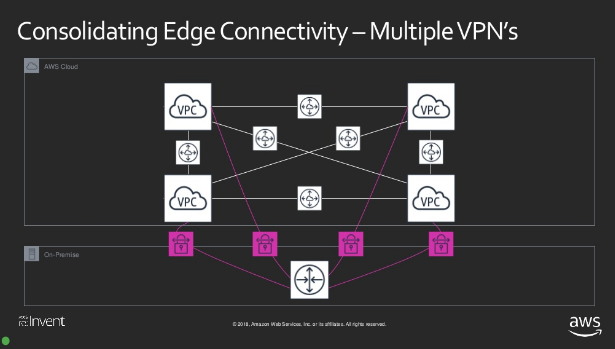 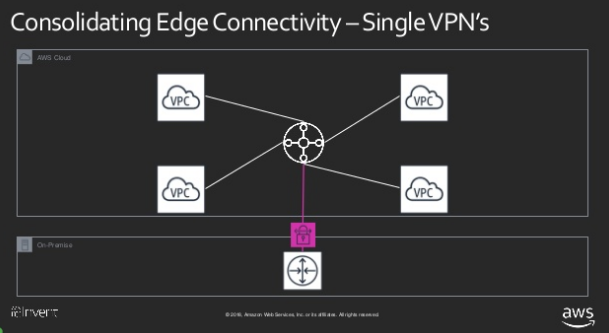 At the customer where I’m currently working we have around 80 accounts and this number will probably increase further. So when Transit Gateway became available we were keen to test it to find out how it could reduce complexity. But reducing complexity was not the only factor, another one was cost.

From the current 80 accounts there are around 50 that have one or more VPC’s each with their own NAT gateway and VPN connection to on-prem. If you do the calculation of the monthly cost you end up with a rather high number.

I tried to describe the necessary steps to setup central NAT Gateways using Transit Gateway as clear as I could. The setup is actually quite simple but it might take some time to get your head around it.

Inspired by the Well Architected framework we decided to put all the Transit Gateway(s) in a separate AWS account (the Transit Gateway Account). This keeps things clean and we can limit access to this account which improves security which is imporatant since this will be a crucial part of our infrastructure. 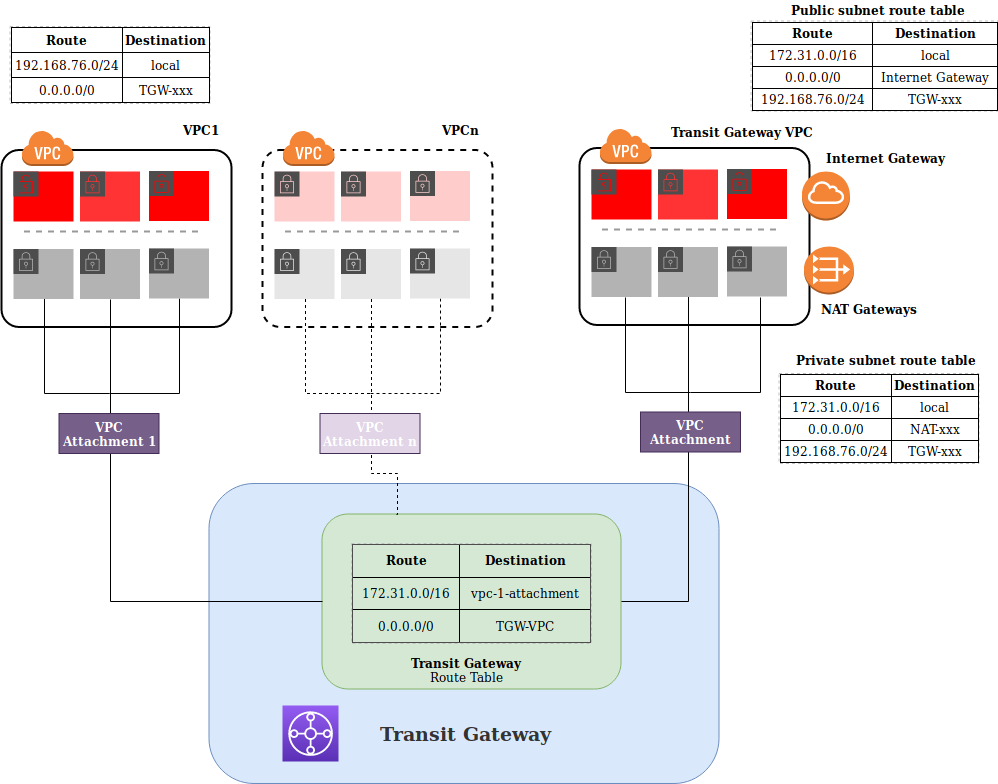 NOTE: The following steps are done in the Transit Gateway account!

Once created you can get the details by running

To make the Transit Gateway visible in your other account(s) we need to share it using Resource Access Manager. Specify the AWS Account ID with the --principals parameter

NOTE: You can also share resources on an Organizational level which makes the resource available without the Pending Accept phase.

Configure a VPC to use Transit Gateway

NOTE: The following steps are done in a regular account!

Use the resourceSahreInvitationArn property from the output in the previous step.

Get the Transit Gateway info

Once we accepted the resource share we should see a Transit Gateway resource appearing in our account.

Now we can attach the private subnets from our VPC to the Transit Gateway. The transit-gateway-id property can be found in the output of the previous command.

NOTE: The following steps are done in the Transit Gateway account!

Accept the attachment. The transit-gateway-attachment-id can be found in the output of the previous step. This can take some time.

Ok. If you were able to follow this without too much trouble you did a good job already. Almost there..

To provide outgoing internet connectivity (NAT) we need to create a VPC with public and private subnets in the same AZ’s as we have in our other accounts. This is important because an instance in a given AZ will use the NAT Gateway in the Transit Gateway account that is deployed in the same AZ.

example: instance in AZ ID ‘euw1-az3’ will use a NAT Gateway from the Transit Gateway account which is also deployed in euw1-az3.

Once you have this VPC deployed you also need to attach this VPC’s private subnets to the Transit Gateway like we did for the account in the previous steps.

To allow traffic from established connections back in we need to configure the necessary routing so that traffic from the internet finds it’s way back to the subnets of the account were it originated from.

In this example the VPC subnet of the attached account is 192.168.76.0/22. So we add a route to the route tables of the public and private subnets that points to the Transit Gateway as a destination for this network.

Each VPC attachment will be added associated to a Transit Gateway Route Table and the available networks of that VPC will be propageted into this route table.

NOTE: If you create a Transit Gateway with no default route table association you need to do this manually. 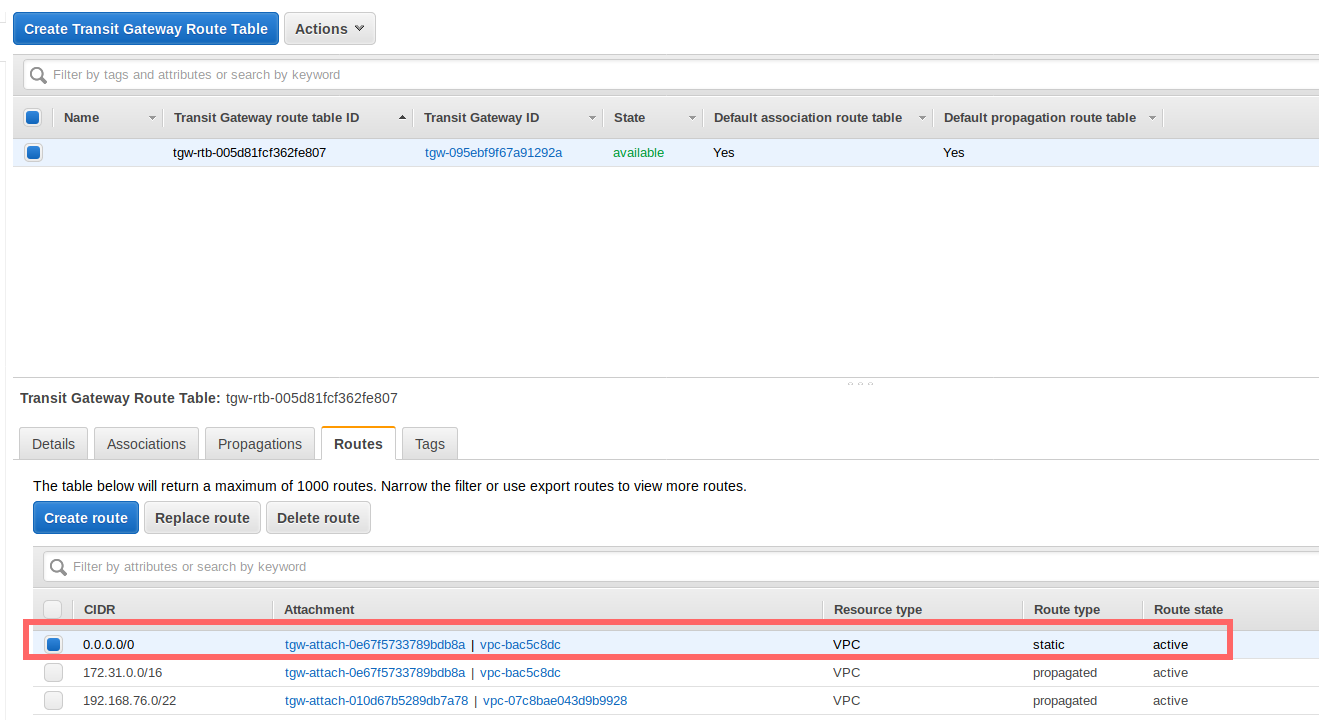 Take into account that NAT Gateways have a limit of 5Gbit/sec. We are currently not even close to that limit but might be different in your case. Keep an eye on those NAT Gateway metrics while migrating or adding accounts.